Bartender's Manual is a cocktail database and bar manager that suggests cocktails to prepare based on the contents of your bar.

Wordbots is a tactical card game (think Heathstone, Faeria, etc), where players craft their own cards and use them to fight in fast-paced arena battles.

This makes Wordbots exciting and dynamic, as players keep coming up with new cards. Our vision is for Wordbots to herald a whole new style of game, which uses sophisticated AI to allow intelligent communication between player and computer.

Wordbots is powered by a semantic parser (built on top of Montague) that can understand a subset of English and turn it into JavaScript. For example, given a phrase like "Deal 2 damage to all enemy robots", the parser sees something like (note that the below parse tree is generated in real-time by the live parser) this:

Wordbots is currently in alpha pre-release, with beta release tentatively planned for mid-2022.

midipi is Python utility for sending MIDI control messages from a Raspberry Pi with a simple interface, designed for 'extended technique' on a Korg SV-1 keyboard.

Equipment required to set it up: any modern Raspberry Pi, an Adafruit T-Cobbler Plus breakout board, a 4-character 7-segment display with an I2C backpack, a 10-channel ADC, two potentiometers, and a button, put together roughly as follows: 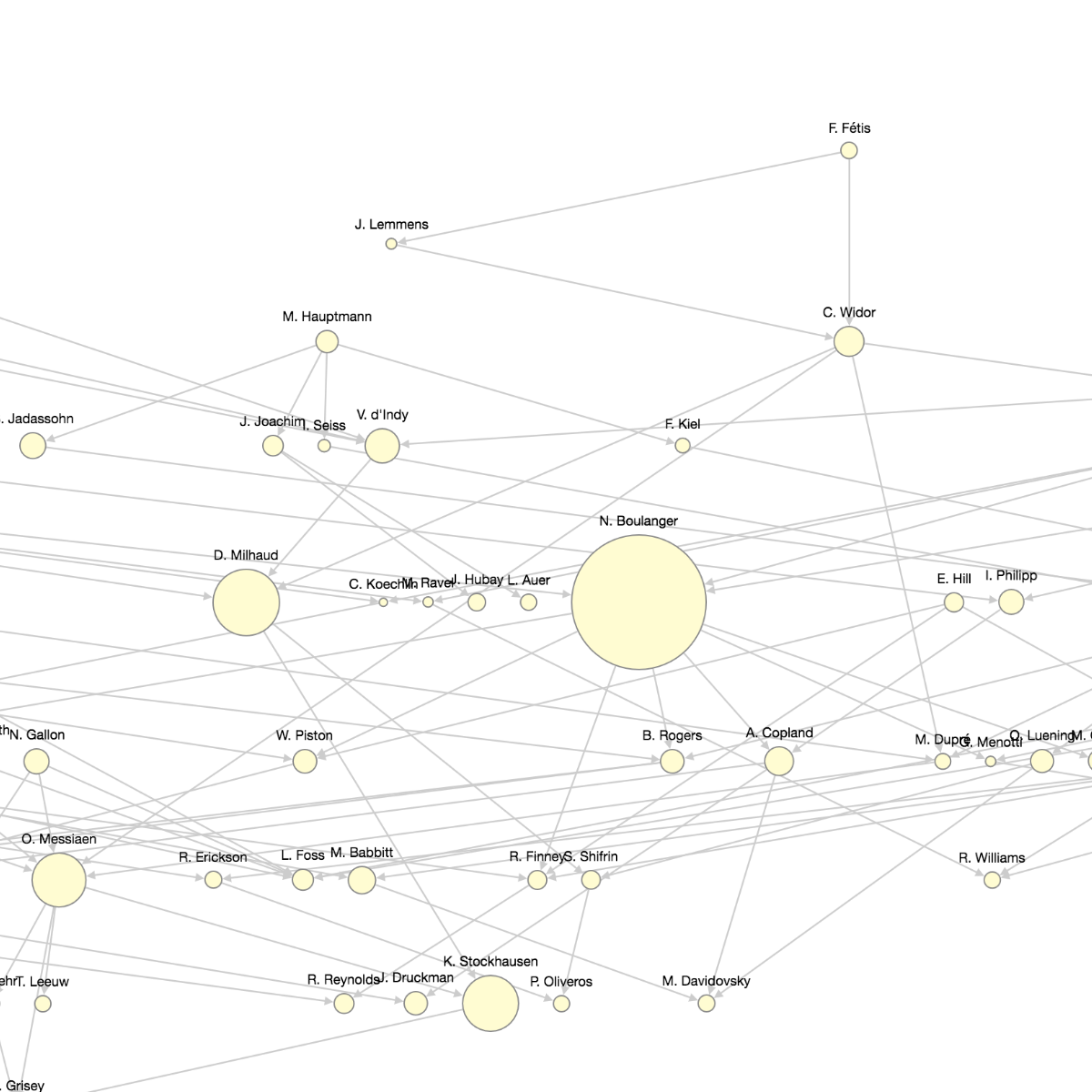 Who Taught Whom? is an interactive visualization of classical music influence (from teachers to students) put together by scraping Wikipedia articles and doing some graph processing to determine notable teachers and connections.

WeatherGrains is a multi-channel granular synthesizer that generates music based on weather at different points on the globe.

Spin the globe around and hear the weather. The temperature, cloud cover, wind speed, humidity, and air pressure are mapped to each channel's detuning, density, attack speed, release speed, and position randomization, respectively. 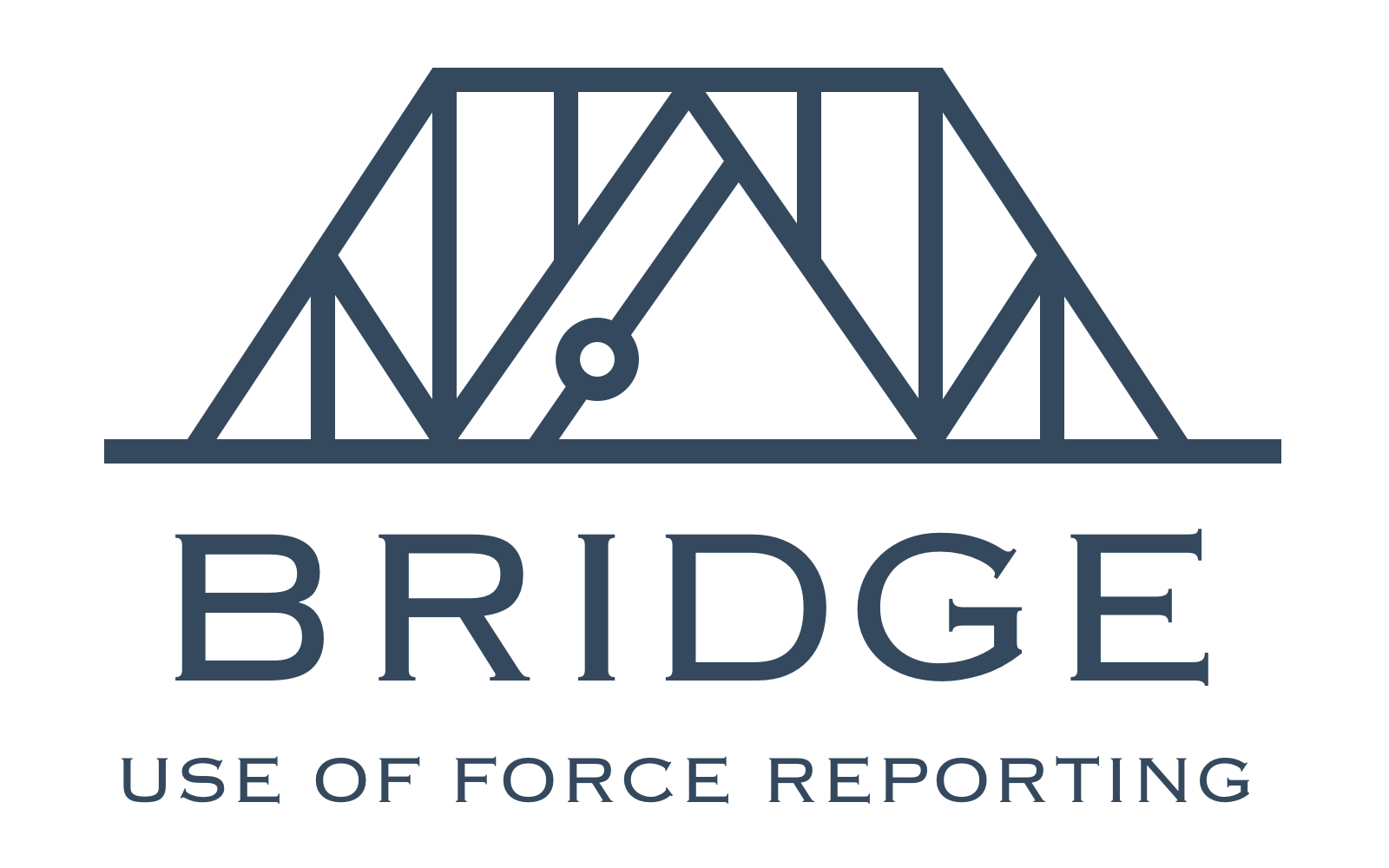 The app helps police officers determine which incidents require reporting, fill out or upload incident information, and send the report to the state. Law enforcement agencies can manage employees and incident flow, perform analytics, and communicate with the state. The state can oversee all agencies and track reporting completion.

Its first implementation is in California under the name URSUS, as a result of Assembly Bill 71. 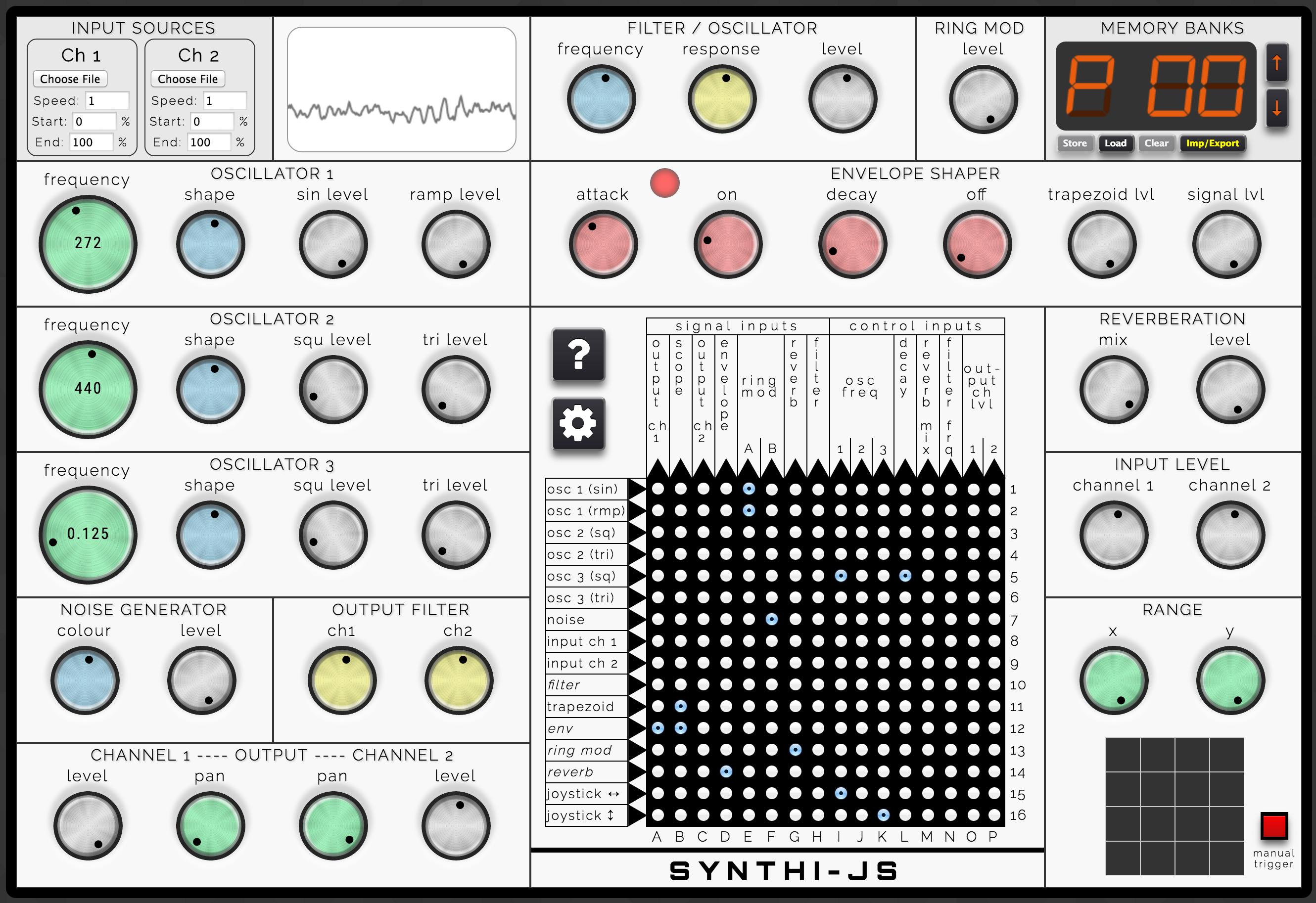 SYNTHI-JS is an emulator of the legendary EMS Synthi A modular synthesizer, built in JavaScript on top of the Flocking library. Features include a fully-functional 16x16 patchboard, 100 memory banks, file upload functionality, and customizable knob controls.

montague is a simple CCG semantic parsing library for Scala. It aims to make semantic parsing as straightforward and idiomatic as possible: to use it for your own application, you simply need to assemble a lexicon made up of definitions that look like this:

montague is an open-source spinoff of the semantic parser used by UPSHOT.

Made with: Jacob Nisnevich
Language: JavaScript

ilikeberniebut.com is a website refuting common criticisms of Sen. Bernie Sanders, made just in time for the 2016 Democratic primaries.

ilikeberniebut.com blew up like crazy. Within three days of launch, it got over 1,500,000 page views and over 100,000 shares on Facebook. TIME even wrote an article about it.

Asshole Transit Bureaucrat 2015 is a semi-complete traffic-simulator-slash-puzzle-game, as well as a statement on the ride-sharing industry. I made it with a group of friends for the 33th Ludum Dare 72-hour game jam (the theme was "you are the monster"). We placed #126 in Audio and #127 in Innovation (out of 1526 jam entries).

Kalevala is a tile-laying online board game for two players inspired by the board game Völuspá by Scott Caputo.

The Kalevala client is written entirely in Elm and started off as an exercise in the functional reactive programming style.

Splooshed is an API that provides water consumption data for individual food ingredients or complete recipes, as well as a Chrome extension that displays water usage data for recipes on most major recipe sites.

The data underlying Splooshed was aggregated from a combination of sources (primarily the USDA National Nutrient Database API and the Water Footprint Network), and sophisticated parsing and conversion is performed to interpret the amounts of ingredients in recipes. Splooshed was built for LA Hacks 2015.

Shattered Worlds is a puzzle platformer with a unique mechanic: you can overlay the content of previous levels over the current level. I made it with a group of friends for the 30th Ludum Dare 72-hour game jam (the theme was "connected worlds"). We placed #46 in Theme and #48 in Innovation (out of 1045 jam entries).

Asteroid Tycoon is a game about asteroid mining that I made with a group of friends for the 29th Ludum Dare 72-hour game jam (the theme was "beneath the surface").

Untrusted is a JavaScript adventure game that requires you to modify its source code as you play in order to complete puzzles.

10 Second Roguelike is a fast-paced roguelike-like that I made for the 27th Ludum Dare 48-hour game development competition (the theme was "10 seconds").

k-means Visualizer is an HTML canvas demonstration of the standard k-means clustering algorithm on a 2-dimensional grid.

glitch_mixer is a mixer/sequencer for minimalist algorithmic compositions of the kind popularized by Viznut -- that is, C programs of the form

where f(t) is some function of t, piped into /dev/audio.

With glitch_mixer, you can mix and sequence these kind of "compositions" into larger works in real time. It works by compiling C programs on the fly, spawning them in separate threads, and using aplay (in Linux) or SoX (in OS X) to pipe the output to /dev/audio. Complex pieces can be built up using simple timing, looping, and subroutine constructs.

The melody.py web server runs as a Flask app on an EC2 instance, and uses VexFlow to draw sheet music and FFmpeg to convert the generated MIDI files to MP3 for HTML5 audio playback.

diffnow-cli is a shell utility that allows you to compare files or URLs via DiffNow from the (Linux or Mac OS X) command line, with the results returned as a shortened URL or as a downloaded diff report.

While I had worked on DiffNow the year before, I challenged myself to use no prior knowledge of DiffNow's architecture while developing diffnow-cli, and relied entirely on inspecting requests made within the web application in order to determine how to simulate interaction with it via cURL.

Frustrated by the lack of convenient libraries for typesetting phonological rules in LaTeX, I set about to make my own. The result is phon_rule, an phonological rule environment that stresses ease of use. For example,

Four Kings Chess is an online four-player chess game with different nations (each nation providing different abilities to its player), developed as an online multiplayer version of my popular chess variant European Chess. The game is fully playable (with 15 nations working), but the documentation is nonexistent and the artwork is not quite complete.

ECMAchine is an in-browser Scheme REPL that is also a toy operating system. It has a virtual filesystem that is accessed through Unix-like commands, as well as a rudimentary process management system.

Problem Set? Marmoset! is an online LaTeX editor and motivational tool, intended as a spinoff of Written? Kitten! for science students. Reward yourself for your hard work with adorable pictures of marmosets! LaTeX is rendered automatically thanks to QuickLaTeX and MathTran. Source code is available.

DiffNow is an online comparison tool for comparing plain text, source code, documents, or archives online. It also lets users share interactive comparison reports. I built the frontend of DiffNow, while the backend is powered by ExamDiff Pro.

In Not a Soul in the World, you play the part of a psychologist trying to convince an uploaded mind that it is human. I made it for the 22nd Ludum Dare 48-hour game development competition (the theme was "Alone").

Gromunity is a working prototype of an online community for urban gardens, in a form of a local market for selling, borrowing, and trading produce, tools, and manpower. We made for the first Cleanweb Hackathon in San Francisco. The site is mostly functional but inactive: we weren't able to market it successfully after the hackathon.

I've always been annoyed by incorrect pluralization in websites ("1 events", etc), so I developed pluralizer, a Yii widget that correctly pluralizes labels for dynamic data. Usage is simple: an instance of the widget is created with the singular and plural forms specified for all labels, and a JavaScript function must be called whenever data changes to refresh the labels.

I wrote a short article about pluralizer here.

CitySandbox was a platform for residents of the Bay Area to ask questions and voice concerns about their communities. Users could post questions on the map in a sort of Reddit / Stack Overflow / Google Maps mashup, and the site could even generate mini-flyers with QR codes for questions and events. CitySandbox is unfortunately no longer active, but you can read about it here.

JezzBall 3D is a three-dimensional adaptation of the classic game JezzBall, made as a final CS184 project.

It's Not Easy Being Muammar is a satire of NATO intervention in the Libyan civil war that I made for the 20th Ludum Dare 48-hour game development competition (the theme was "It's dangerous to go alone! Take this!").

Cal Day Photo Hunt was a competitive scavenger hunt run by the Social Apps Lab on Cal Day 2011, with the goal of getting visitors to pay more attention to their environment.

Made for: PrestoSoft
Language: C#

OOXML2Txt is (as far as I can tell) the first free OpenXML-to-text converter, and can convert Word, Excel, and PowerPoint 2007+ files to text/csv files. It was developed as a plug-in for ExamDiff Pro, but is a general-purpose command-line utility. You can download it here.

Terra Nova is an exploration game based on Captain Robert Scott's failed Antarctic expedition that I made for the 19th Ludum Dare 48-hour game development competition (the theme was "Discovery").

RickRemoval is a multi-browser extension that automatically detects rickroll videos and prevents them from playing. It was developed for the 2010 Yahoo Hack-U event at U.C. Berkeley.