The Church-Rosser Theorem and the Consistency of Lambda Calculus

For my Computability final paper, I wrote about the Church-Rosser Theorem and the consistency of λ-calculus, as well as introducing the general theory of λ-calculus and showing how arithmetic can be performed within it.

What is the Church-Rosser Theorem?

The Church-Rosser Theorem for β-reduction states that whenever some expression \(M\) can be β-reduced to two different expressions \(N\) and \(P\), there exists some expression \(Q\) that both \(N\) and \(P\) can β-reduce to. This property is also called confluence, and is sometimes referred to as the diamond property, because the resulting graph of reductions looks like this: 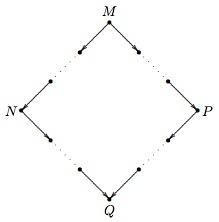 In my paper, my proof of the Church-Rosser mainly follows the classic Tait-Martin-Löf proof, which is well-known as one of the simplest proofs of the theorem, relying on nothing more than a basic understanding of the theory of β-reductions.

The proof has three stages:

What does this mean for consistency?

In the final section of my paper, I show that it follows from the Church-Rosser Theorem that every expression in λ has a unique "β-normal form" - that is, a unique form from which the expression cannot be β-reduced any further.

Then, I show that two terms cannot be equal to each other in λ-calculus if they are not β-equivalent. This is a result that follows directly from the axioms of λ-calculus.

Putting all of these pieces together, if two terms \(M\) and \(N\) do not share the same β-normal form, then the statement \(M = N\) is not provable in λ-calculus.

It's easy to find two terms that do not share a β-normal form - for example, \(I = λx.x\) and \(K = λx.(λy.x)\). Thus, the statement \(I = K\) is not provable in λ-calculus, and so λ-calculus is a consistent theory, because if λ-calculus were inconsistent, then by definition every (syntactically valid) statement would be provable in it.

If this has piqued your interest, check out my paper here.